December 13-16, 2018, Yerevan- leading scholars from the Chinese Academy of Social Sciences were invited by the “China-Eurasia” Council for Political and Strategic Research, foundation to visit Armenia. Within the framework of the visit with their Armenian colleagues Dr. Xiao Bin, Dr. Bao Yi and Dr. Wu Hongwei participated in an academic seminar “China, Eurasia and Armenia: Views from Yerevan and Beijing.” It is worth mentioning that Chinese initiative “One Belt, One Road” provides a lot of opportunities to other states to get Chinese investments, but there are not any big Chinese investments in Armenia, even if we compare with other South Caucasian countries.

Professor Wu Hongwei emphasized that the Chinese-Georgian relations have developed dynamically, and the Chinese side is making huge investments there. He expressed hopes that through the information and contacts with Armenian specialists obtained during the visit, it will be possible to draw new recommendations through which it will be possible to develop economic relations with Armenia. In turn, Dr. Bao Yi presented her research on China’s humanitarian cooperation with Central Asian countries and noted that this successful experience can also be used in the South Caucasus. Dr. Xiao Bing introduced his paper on promotion of the cooperation of international capacity under One Belt, One Road initiative in the era of technological transformation.

The head of the ARMACAD, Dr. Khachik Gevorgyan told  about the  prospects of the ARMACAD in the  development of Sino-Armenian academic relations in the framework of the One Belt, One Road. 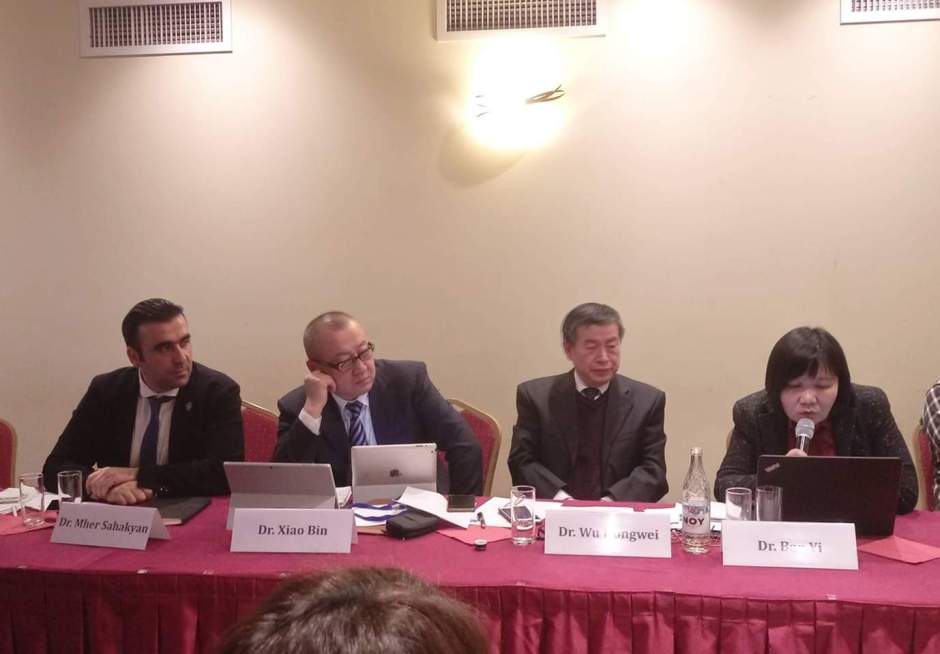 The organizer of this academic event, Dr. Mher Sahakyan, head of the “China-Eurasia” Council for Political and Strategic Research, foundation, spoke about the prospects for the development of the Armenian-Chinese relations in the framework of the Chinese initiative. As he noted, if a branch of one of the leading Chinese banks opened or if Armenia and China establish a joint bank, the result will be significant financial investments in Armenia. The financial field of the country will be diversified, and if Dram-Renminbi conversion is implemented, bilateral trade between Armenia and China will be realized in their own currencies. He recommended, that Armenia can try to stand a Regional member of the Asian Infrastructure bank and after get sovereign backed or non-sovereign backed loans for its state-owned noncommercial organizations, private organizations, and international organizations which works in the territory of Armenia, that they invest this money in Armenian North-South Road Corridor, which will significantly enhance Armenia’s capabilities to be involved in the Silk Road Economic Belt’s China-Central Asia-West Asia Economic Belt. Armenia and China can also start cooperation in UN peacekeeping missions, as both states are interested in it.

Dr. Mher Sahakyan, also talked about the possibility of creating an Armenian-Chinese joint military-industrial center in Armenia, which will produce military robots, drones and so forth.

He also noted that Armenia can negotiate with China for its participation in the “Digital Silk Road,” Armenia and China can also cooperate on the research of the development of the 5G.
After the academic seminar Chinese and Armenian scholars agreed to strengthen cooperation between the Armenian Foundation “China-Eurasia” Council for Political and Strategic Research and the Chinese Academy of Social Sciences, to conduct joint research and make recommendations for the development of Armenian-Chinese relations.

Copyright © 2022 Create a free website or blog at WordPress.com.